​He was also featured at "Keys to the Future" Contemporary Music Concert Series in 2009 and 2010 in New York City. His performance of Vuk Kulenovic's "Virginal" in Le Poisson Rouge on the closing night of the "Keys to the Future" festival was described as "sensitively rendered" by New York Times. He was also featured in three special concerts during Carnegie Hall’s 2010-2011 season.  ​ 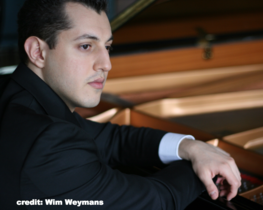 rmenian-American pianist and composer Karén Hakobyan has emerged as a versatile force on the international musical scene.  Since his Carnegie Hall debut at the age of seventeen, he has been performing in major concert halls in Armenia, Argentina, Mexico, Germany, France, Japan and the United States. Mr. Hakobyan appeared as a soloist in North America with the World Peace Sinfonietta, the University of Utah Philharmonia, the Salt Lake Symphony, Summer Arts Festival Orchestra, the New American Symphony, Ridgewood Symphony, Ureuk Symphony Orchestra and the World Festival Orchestra and internationally with the Tucuman Philharmonic Orchestra (Argentina), the Monterrey Symphony Orchestra (Mexico), the Armenian Philharmonic Orchestra, the Serenade Chamber Orchestra, and the National Chamber Orchestra of Armenia.

Karén regularly appears in prestigious festivals and concert series. Some of his festival performance highlights include: the "Lille International Piano(s) Festival" in France in 2005, "The Pianist as Composer" Festival at Mannes College of Music in 2008 and "The Mendelssohn Salon Yearlong Festival" in 2009 in New York City and Gina Bachauer International Festival in 2014 in Utah.

Karén is the Founder and Artistic Director of Pegasus: The Orchestra based in New York City and is also the Cultural Program Advisor of Armenia Fund, USA.

There are a lot of "bangers" on stage today posing as virtuosos. It is a distinct pleasure to count Karen Hakobyan as among the pianists whose virtuosity is at the service of the music.